This is the Stroop Test for ADHD. Difficulty to perform this test is only an indication that someone might have ADHD. Please follow these instructions in order:


1. Read down the list of words in black print. Say them aloud. Time yourself.

2. Read down the list of colored words. Say aloud the color of the lettering, not the word itself. It's a little tricky but you can do it. Time yourself.

3. Re-read the list of colored words. This time say the word itself, not the color of the letters. Again, it's a little tricky.

Most people find #2 and #3 take longer than #1 and a bit challenging but it can be done. A little frustration and some laughing is the usual result. ADHD people have quite a bit more difficulty in doing #2 and #3, much more so than non-ADHD people. A higher level of frustration and longer time to get through the colored words is experienced.

ADD / ADHD and Understanding How the Brain Works 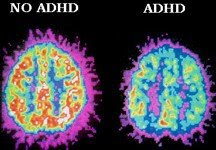 ADHD is a neurological disorder. Scientists have found that in people with ADHD, the Cerebral Cortex, the Limbic System and the Reticulating Activating System are different as compared to the brains of people without ADHD. These differences explain the short attention spans, learning difficulties, impulsiveness and hyperactivity.

The Cerebral Cortex is located under the forehead. It has been found to have slower brain wave activity in people with ADHD. Brain imaging techniques have also found that the right frontal lobe is a bit smaller as compared to that of people without ADHD. This area controls the ability to pay attention, focus and concentrate. It controls the ability to plan, make decisions, learn and remember as well as to behave appropriately. The Cortex has "Inhibitory Mechanisms" that control impulses and inappropriate behavior.

The Limbic System is that part of the brain that sits above the brain stem (which in turn sits atop the spinal cord). It controls emotions, motivations, and one's survival instinct. The Limbic System also controls what is remembered and where in the brain memories are stored.

The Reticulating Activating System (RAS) is also located at the base of the brain, near the spinal cord. It receives information about the world and one's body through the senses. It stimulates the neurons of the Cerebral Cortex and is responsible for circadian rhythms (sleep & awake patterns), central nervous system activity, and attentiveness. A completely shut down RAS results in loss of consciousness or coma. If the RAS is underactive, the result is poor learning, memory and little self control. If the RAS is overactive, the person startles easily, talks too much and is restless and/or hyperactive. 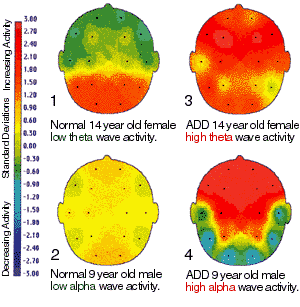 Recommended Video on ADHD and the Brain:

What do you think of this?

English magistrates determined that a 16-year-old boy was "not guilty" for setting a 12-year old girl's hair on fire in December 2008. It occurred near a Burger King in Cheltenham.

Here are both sides of the argument:

The victim says he "did it deliberately" and threatened to do it again. Her hair did not go up in flames but it did "smoulder" and "smoke."

The boy says he found the lighter and was playing around with it, flicking it near the girl but never intended to actually set her hair on fire or do any other kind of harm. A witness says they were all just having some fun and thinks a stray hair must have caught fire. The boy's solicitor, Ros Jackson, argued that the boy did not have "intent" nor was he in a "reckless state of mind." He also said that the boy suffers from ADHD and did not take his medication on the day of the incident. The boy said in court that he "just does things without thinking about it."

Justices deliberated for about an hour, finding that the boy was not behaving in a reckless manner and ruled in his favor.