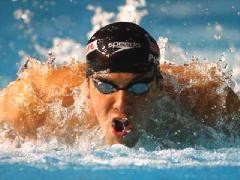 As a toddler, little Michael Phelps was constantly talking, asking questions, and needing attention from other people. His preschool teachers complained that he was noisy during quiet time, wouldn't sit during circle time and bothered the other children.

During elementary school, Michael's teachers described him as "immature" and said he couldn't sit still, be quiet when required to, or stay focused on his classwork. Although he did well with physically active subjects like PE and science experiments, he did not like to read. His report card had D's, C's and B's.

Both of Phelps' sisters were swimmers. His mother decided to get him swimming, too, as an outlet for all that excess energy.

When Phelps was in 5th grade, his doctor (and fellow parent at Michael's sisters' swim meets) suggested he might have ADHD. He himself had witnessed Micheal running around at the meets "like a crazy person." Assessment forms were sent to the teachers and the results were no big surprise..."cant sit still, keep quiet or focus."

At age 9, Micheal started taking Ritalin which helped a little bit. His grades improved slightly but he continued to do minimal work, never going above and beyond.

By age 10 Michael was doing great in swimming. He ranked nationally for his age group in competitions. Swim meets offered Michael a way to focus on something he loved. ADHD children are very good at focusing on something they have a passion for. He started setting records.

After about 2 years of being on ADHD medication, Michael asked his mom if he could stop taking it because no one else took it and going to the school nurse for mid-days medication made him feel different than the other children. He promised his mother he could handle school without the medication.

Phelps graduated from Towson High School in Maryland and studied at the University of Michigan in Ann Arbor.

For a listing of other famous people with ADHD, click on http://adhdandmore.blogspot.com/2009/01/famous-people-with-adhd.html#links 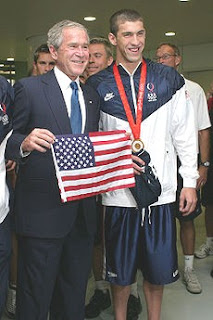 Thanks for posting this article. I related well to Michael Phelps early days with ADHD issues but never took Ritalin. Back in my day (1980's) I never heard of or saw people using ritalin for ADHD. I still don't use medication for my own ADHD and I am aged 33 at the moment. Although it has taken 33 years to sort out a whole lot of learning behaviours.

But now I am leading a successful life after a horrible year last year. Anything is possible once you get on the track to finding the passion and going to do it just like Michael Phelps.