My Mind on Drugs - an ADHD essay by Dr. Jay S. Winston

.
The excerpt below is from the blog article, "My Mind on Drugs," by guest author Dr. Jay. At the end of this article you will find his biography and a link to his own blog, "Yoga for Cynics." Some of you might know him as DrJay1966 on Blog Catalog.

"My Mind on Drugs"

"In an earlier post I went on a bit of a rant about the tendency to prescribe drugs like Ritalin and Adderall to what would appear to be the growing legion of kids affected by ADD (Attention Deficit Disorder) and ADHD (Attention Deficit Hyperactive Disorder). In the past, I’ve been called on this kind of remark, and told about people who were unable to read a page or sit down for half an hour before they were put on these drugs, and now they can.
"Am I saying they should be denied the medication that’s improved their lives? No, I’m not. I am, however, suggesting that such cases are a small subsection of the rapidly exploding total, and that, in many cases, the problem might be the educational system, not the kids.

"Allow me to provide a bit of autobiography. They tried to get me on Ritalin twice when I was growing up, as a way of dealing with my apparent inability to pay attention in math class (or for that matter, any class that failed to grab my interest, i.e. almost all of them). I refused and, fortunately, my parents didn’t push the matter. Was my poor attention span a problem? Yes. In fact, my grades were lousy throughout grade school, and I probably would've been held back more than once except that the teachers seemed to agree that I could’ve passed if I’d tried, and that forcing me to repeat would only make things worse for everybody involved.

"In the later years of high school, I did a bit better and, having taken a year off and written a personal essay describing my trials and tribulations and heroic overcoming of the same, I made it to college. It wasn’t until graduate school, though, that I really began to excel. I won’t say that I floated through two Master’s degrees and a PhD without a care, but I didn’t seem to have any more trouble than anybody else.

"Lectures rarely held my attention and, as always, I had to have music playing to study but, as courses were all discussion based, and the vast majority of work was self-directed, that wasn’t much of a problem. All in all, it was a whole hell of a lot easier than grade school.

"Do I sound like a learning-disabled person? Or might it be that I was struggling with an educational system which itself has a severe disability in terms of understanding that some minds work differently than others and allowing those minds room to flower? Alas, from what I hear, things have only gotten worse since I left high school, and any hope for change has been positively knee-capped by “No Child Left Behind.” Can there be any doubt that, as reliance on standardized testing continues to grow, the attention deficit epidemic and resulting drugging of America's youth will as well?" 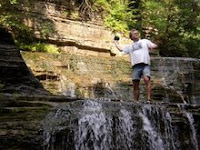 Dr. Winston describes himself as "the kind of doctor who, in case of emergency, can explain Faulkner while you die."

Dr. Winston's blog: YOGA FOR CYNICS - "...thoughts on yoga, cynicism, things to do while drinking coffee, the great outdoors, writing, the great indoors, art, the not-so-great outdoors and indoors, drugs, music, politics, and biking, or not."